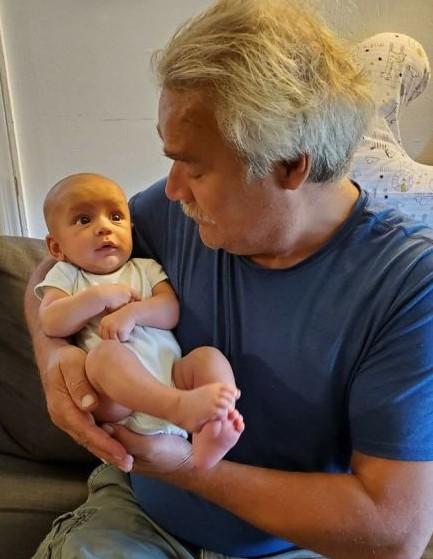 William “Butch" Hamilton Byrne died suddenly and unexpectedly at home on February 4, 2020. Born October 26, 1962 in Washington D.C. he was the son of the late Arthur Peter Byrne and Margaret Elizabeth (Aiken) Byrne.

Butch grew up in Derwood, Maryland, graduated from Magruder High School in 1981 and attended Montgomery College. He worked as a Kosher butcher at Shalom Kosher Market in Wheaton, Maryland for eighteen years.

He met his future wife in 1984. Butch married Anne Spottswood (Chamblin) Byrne May 18, 1985. They worked hard, saved and built a home in New Market, Maryland and moved there in 1990 where they started a family. Butch and Anne operated A&B catering from 1994 until 2002 as a successful side business. Butch spent his childhood summers and holidays at his grandparents’ farm in Accident, Maryland and he always dreamed of living in Garrett County. He was able to fulfill that dream in 2002 when he was asked to operate Red Run Lodge in McHenry, Maryland. The family sold their house in New Market and moved to Oakland, Maryland. After the lodge sold, he worked with his cousin in land development and began to volunteer in the local community. After his father’s death he cared for his mother Peggy until her death in 2018. Butch was excited about the birth of his grandson last May and was planning to travel this year.  His volunteer work at the Nearly New Thrift shop and It’s in the Bag Program were highlights of his week

He had many passions and talents throughout his life. He was an accomplished cook and baker. He enjoyed antiquing and restoring his finds, as well as restoring and updating his historic house. Butch loved to travel (especially to Mexico), spend time with family and friends, and help others in need. Butch was filled with kindness and compassion.

He had a gift for storytelling and could easily talk to anyone about anything. Literally, anything. Sometimes he would zero in on one person in the room and just keep telling them stories. This was coined being “Butchered” by Joey, his daughter’s partner. The term stuck, if you knew Butch, he was renowned for his gift of gab.

He was always fond of animals and working outside. He and his dog Mister were inseparable.

His memory will live on through his loved ones and we will miss him very much. Butch is survived by his wife Anne, their three children: Benjamin and his partner Rain, Alexandra and her son Marcelo, Virginia and her partner Joey. Butch leaves behind his beloved sister Kathleen Layer her husband Jeff, and their sons Sean and Jason. He is also survived by Anne’s siblings, their spouses, nieces, nephews, as well as numerous aunts, uncles, and cousins.

The funeral service for Butch Byrne will be held at St. Matthew’s Saturday, February 8th at 11 AM, with interment at the Columbarium at St. Matthew’s. The Rt. Rev. Robert Ihloff, Assistant Bishop of Maryland will officiate, and the Rev. Dr. Chip Lee will assist and preach. A reception will follow in the Parish Hall.

Rest eternal grant him O Lord and let light perpetual shine upon him. May Butch’s soul and the souls of all the faithful departed Rest in Peace. Amen.

In lieu of flowers donations may be made in Butch’s memory to” It’s in the Bag” or St. Matthew’s Episcopal Church.   The C & S Fredlock Funeral Home, P.A., Oakland is honored to serve the Byrne Family at this time.

To order memorial trees or send flowers to the family in memory of William Byrne, please visit our flower store.