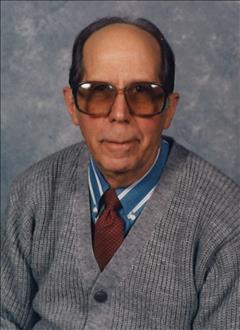 Vincent F. DiBacco, 98 years old, a local WWII veteran and a native of Thomas, WV, departed this life on October 7th, 2019 at Cortland Acres in Thomas, WV. He was born September 17th, 1921, in Thomas WV, the youngest son of the late Venanzio and Paolella DeCesare DiBacco.
He was the last surviving member of his immediate family. He was proceeded in death by his sisters Mrs. Romeo "Marie" Silvester of Coalton, WV, and sister Francesca, CSJ "Edith" who was a Sister of the congregation of St. Joseph, Wheeling, WV., and his brothers, Carmen "Zeke" DiBacco, Harry "Reggie" DiBacco, Guido J. DiBacco, Albert DiBacco, all of Thomas, WV, Abe DiBacco of Martinsburg, WV, and John V. DiBacco Sr., of Elkins, WV, and a brother and sister who died in infancy. He is survived by his sister-in-law Edith R. Rossi DiBacco from Thomas and by many nieces and nephews and great nieces and great nephews.
Vincent had many good friends throughout his life. He always looked forward to visits and conversations with friends and family. He was a graduate of Thomas High School and attended St. Charles Seminary for two years. In 1942, he made himself available for the draft. In June of 1944, he served in the Normandy Invasion with the US Army’s 61st Medical Battalion. He was the Message Center Chief, making sure messages would get to company commanders. In 1945, he ended his Army career with the rank of Sergeant. After returning home from the war, he assisted with the family-owned business. He took great pride in his service to his country.
He was a 30-year member of the TVFD, Co. 40, a life member of the Knights of Columbus, Thomas Council 2010, a member of the VFW Post 896, the American Legion Post 14, and The Loyal order of Moose at Martinsburg, WV. He was a lifelong member of St. Thomas Aquinas Catholic Church. He lived his life placing his faith first.
Friends will be received at Hinkle-Fenner Funeral Home, Wednesday, October 9, from 4:00 pm – 8:00 pm with Rosary held at 7:30 pm. A Mass of Christian Burial will be held 11:00 am, Thursday, October 10 at St. Thomas Aquinas Catholic Church with Father Timothy Grassi and Father John V. DiBacco as celebrants. Interment will follow in Mt. Calvary Cemetery. Hinkle-Fenner Funeral Home has been entrusted with the arrangements. Condolences may be made to the family at www.hinklefennerfuneralhome.com
To order memorial trees or send flowers to the family in memory of Vincent DiBacco, please visit our flower store.