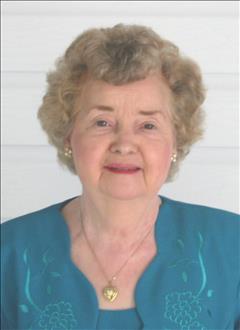 She was married to the late Norman Keith Feather on July 14, 1950. Surviving are two sons, Dennis (Betty Jo) Feather and Gary (Robin) Feather both of Eglon, West Virginia. She is survived by seven grandsons, two granddaughters, five great-grandsons and four great-granddaughters.

In addition to her parents, Ruby was preceded in death by her husband, Norman Feather, her son, Milton and daughter, Connie.

She was a member of the Maple Spring Church of the Brethren. She enjoyed visiting with family, playing bingo and watching the WVU Mountaineers.

In lieu of flowers, donations may be made to your favorite charity.

Friends will be received at Hinkle-Fenner Funeral Home, Friday, October 4, from 4:00 pm - 8:00 pm. Funeral services will be held, 11:00 am, Saturday, October 5, at the Maple Spring Church of the Brethren with Rev. Dan Jordan officiating. Interment will follow in the Maple Spring Cemetery. Hinkle-Fenner Funeral Home has been entrusted with the arrangements. Condolences may be made to the family at www.hinklefennerfuneralhome.com

To order memorial trees or send flowers to the family in memory of Ruby Feather, please visit our flower store.

Maple Spring Church of the Brethren

Maple Spring Church of the Brethren