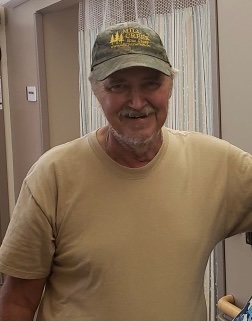 Robert Clinton Kimble, 69, of Oakland passed away on Sunday, March 14, 2021, surrounded by his family. Born on September 26, 1951, in Oakland, he was the son of Betty Josephine (Kisner) Kimble of Oakland and the late Pinkney Clinton Kimble. He was a veteran of the United States Army having served in the Vietnam War. In his younger years, he worked for Flying Scot in Deer Park and then went on to be a crew manager for Appalachian Crossroads. In addition to his mother, he is survived by a brother, Jack Kimble and wife Debbie of Aurora, WV; a sister, Mary Glotfelty of Oakland; a brother in law, Bill Ferry, Sr. of Oakland; nieces, Kelly Mayne of Aurora, Jennifer Paugh of Oakland, Tracy Wright of Short Gap, WV, and Jackie Householder of OH; nephews, Thomas Kimble of Aurora, WV, Bill Ferry, Jr. of Mt. Storm, WV and Jamie Glotfelty of Martinsburg; and numerous great nieces and great nephews. In addition to his father, he was preceded in death by a sister, Nancy Jane Ferry. Per his request, he was cremated. Memorial donations may be made to Hospice of Garrett County, PO Box 271, Oakland, MD 21550. The C & S Fredlock Funeral Home, P.A., Oakland is honored to be assisting the Kimble family.

To order memorial trees or send flowers to the family in memory of Robert Kimble, please visit our flower store.