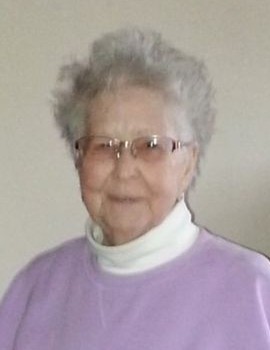 Naomi Agnes Ellen Podmokly, 85, of Oakland died on October 15, 2021, at Dennett Road Manor. Born in October 23, 1935, in Oakland, she was the oldest daughter of the late Reynold "Tobe" and Ruby Ashby.
She was a graduate of Southern High School then moved to Long Beach, California and then to Illinois in 1956. She attended Morton College in Chicago and Riverside College. Naomi retired after thirty years from SPS (Aerospace Fasteners) Technologies in Illinois.
She is survived by a daughter, Rena Moroni; granddaughter, Naomi Moroni; brother in law, Edward Elicky, all of Oakland; nieces, Donna Ziegler and Pam Bittinger; and nephews, Eric Bittinger and Todd Bittinger, all of the Baltimore area; two special friends from Illinois, Susan Turner and Gail Korallis, with whom she kept in touch nearly every day; and Jay and Judy Umstot and Brenda Burgess, from Oakland who were always there for her.
In addition to her parents, she was preceded in death by her husband, Fredrick "Fred" Podmokly, in 2011; her oldest daughter, Sharon "Sherry" McGee, in 2014; and two sisterrs, Willavenne "Beanie" Hogan and Veletta "Toby" Elicky.
At Naomi's request, she was cremated. Interment will be in the Oakland Cemetery at a later date.
Memorial donations may be made to the Southern Rescue Squad, PO Box 378, Oakland, MD 21550.
The C & S Fredlock Funeral Home, P.A., Oakland is honored to be assisting the family.

To order memorial trees or send flowers to the family in memory of Naomi Podmokly, please visit our flower store.