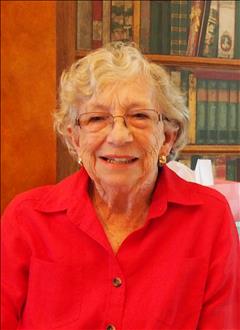 Martha Wilson Wolfe, 86, died Friday September 13, 2019 at Cortland Acres inThomas, WV. She was born in Arnoldsburg, West Virginia, January 26, 1933, the daughter of the late Clyde and Elsie Witt Wilson. Martha was preceded in death, by her husband, Richard Lee, whom she married August 20, 1955.
Martha and Richard lived in Clarksburg, West Virginia until retirement. Her life there was dedicated to raising her family, enjoying friends, and serving others. On Saturdays you could find her cheering on the Mountaineers or playing golf at
Clarksburg Country Club. As a long time member, she was involved with the
Women’s Golf Association. She was also an active member of First United Methodist Church, where she sang in the choir, and the Clarksburg League for Service.
Her life was a living example of what it meant to serve others. Upon relocating to Timberline in Canaan Valley, Martha became involved in the local community. She was a member of St. John’s Lutheran Church in Davis where she served in many ways including a time as the organist. Martha was also very active in both the Thomas-Davis Lions Club and the Friends of Cortland Acres.
A farm girl at heart, Martha loved being outdoors. She enjoyed hiking, gardening, bird watching, and cross-country skiing. Martha appreciated, loved and respected the beauty of West Virginia.
As a familiar face around Tucker County, she knew no stranger. Her love for people was exemplified by her ability to meet anyone with a smile and laugh. She had a sense of humor that welcomed you in and left a lasting impression.
A great woman, wife, mother, grandmother and great-grandmother she led her family by example. Martha is survived by a daughter, Elizabeth (William) Fox, four grandchildren, Alyssa (Karthik) Jayaram, Sarah (Giancarlo) Bobbio, Amanda Wolfe, and Matthew Fox, and five great grandchildren, Indira, Rigby, Violet, Christian and Rohan. Martha was also preceded in death by a son, Richard II, a grandson, Zachary Wolfe, three sisters, and two brothers.
Remembrances, if desired, may be made to a charity of your choice.

At the request of Mrs. Wolfe, she was cremated. Friends will be received at Hinkle-Fenner Funeral Home, Monday, October 14, from 9:00 am - 10:00 am. Funeral services will be conducted at 10:00 am with Father Timothy Grassi officiating. Interment will follow in Good Hope Masonic Cemetery in Good Hope, WV. Hinkle-Fenner Funeral Home has been entrusted with the arrangements. Condolences may be made to the family at www.hinklefennerfuneralhome.com

To order memorial trees or send flowers to the family in memory of Martha Wolfe, please visit our flower store.