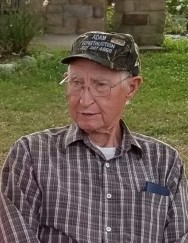 John Edward Tasker, 87, of McHenry, passed away on Thursday, January 9, 2020 at WVU Ruby Memorial Hospital.  Born on December 24, 1932 in Vindex, MD, he was the son of the late William and Lula (Stewart) Tasker.  John proudly served in the United States Army and was retired from the Garrett County Roads Department.    He was a member of the McHenry Volunteer Fire Department and volunteered with Accident EMS.

In accordance with John’s wishes, he will be cremated.  Friends will be received at the Calvary Tabernacle, 27893 Garrett Highway, Accident, MD on Friday, February 28, 2020 from 6-8 PM and again on Saturday, February 29 from 12-1 PM at which time there will be a memorial service with Pastor Pascal Crites officiating. The C & S Fredlock Funeral Home, P.A., Oakland has been entrusted with arrangements.

To order memorial trees or send flowers to the family in memory of John Tasker, please visit our flower store.