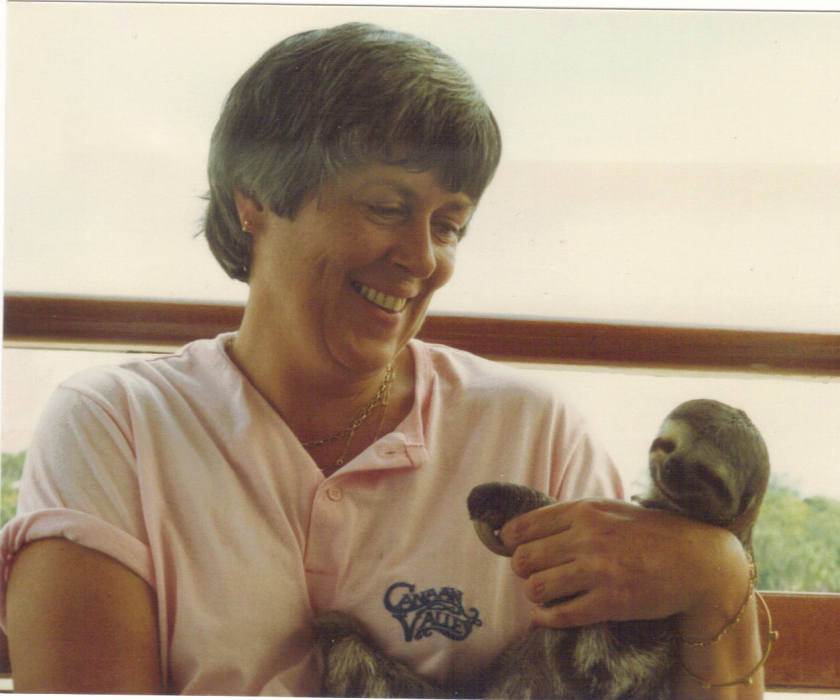 “Jana” Kinkaid died on July 18, 2020, at her home in Canaan Valley, WV, where she had lived for more than 35 years.  She was born April 9, 1941 in Sistersville, WV and was a direct descendant of Charles Wells who settled the area in the early 1800s and whose daughters founded the town.  She was the daughter of J. Wells and Jeannette Simmons Kinkaid and was the last of her immediate family.  Besides her parents, she was preceded in death by her brothers, John Wells Kinkaid, Jr. (Jack) and Robert William Kinkaid (Bob).

She spent her childhood on the original Wells family homestead in a house built by her great-great grandfather in 1832.  The house was later known as “Welkin.”  Jana’s first job was as a lifeguard at the Sistersville City Pool.  Also, in her youth she served as a Camp Counselor at Camp Greenlaural, N.C.

Jana attended schools in Sistersville through eighth grade and graduated from St. Anne's School, Charlottesville, VA, in 1959. She attended Southern Methodist University (SMU), Dallas, TX, then graduated with a BA from the University of Colorado, Boulder in 1964.  She worked while studying, as a receptionist in the Officer’s Club at Fort Myer in Alexandria, VA, and as a bookkeeper for a bank in Boulder, CO.

She was married to Bill Elio who was employed by Pan American World Airways. They lived in New York; San Juan, Puerto Rico; Lagos, Nigeria; and Miami. They were divorced after twelve years and there were no children.

In San Juan, Puerto Rico Jana tended bar part-time at a rum shack in Valle Arriba Heights, near San Juan, and volunteered for the Red Cross at Fort Brooke Hospital in old San Juan and for the “Say It in English” program at a public high school in San Juan.  In Miami Jana joined the barbershop group, Sweet Adelines, and sang baritonein the chorus and in a quartet.

Jana moved back to Sistersville after her divorce. There, she served as municipal judge, was active with Sistersville EMS, and was employed part-time as a rural mail carrier.

From her father, Jana inherited a fascination with Confederate General Stonewall Jackson and, following a family tradition, she celebrated his birthday at her home in Canaan Valley every year for 21 years, a gathering once attended by Stonewall's great-great granddaughter of North Carolina.

In 2002, Jana purchased a small cottage near Lexington, VA, where she went for about three months every year to enjoy springtime.

Jana always had a dog for a companion.  Through the years, one by one, she loved her buddies – Boots, Josh, Bart, Zeke and Jeb.

Jana traveled often when she was younger.  Highlights included a cruise around the world; a two week stay in La Paz, Bolivia and surroundings; a cruise down the Mississippi on a stern wheeler; a cruise 1,000 miles up the Amazon River from Belem to Manaus.

Jana considered herself somewhat of a curmudgeon but was also a fairly happy soul.  She was always inquisitive, had many interests and reveled in the wiles of Nature’s ways.  Jana was grateful for the good life that was given to her.

She was cremated and there will be no service.  Arrangements by Hinkle-Fenner Funeral Home.

In lieu of a memorial or a party, donations may be made to any of the following: The Jeannette E. Kinkaid WVU Athletic Endowment Scholarship, P.O. Box 0877, Morgantown, WV 26507; the Tucker CommunityFoundation (for the Cotrill’s Opera House), P.O. Box 491, Parsons, WV 26287; the Stonewall Jackson House VMI Foundation, P.O. Box 932, Lexington, VA 24450; or, the Kinkaid Family Charitable Foundation, 83 Edgington Lane, Wheeling, WV 26003.

To order memorial trees or send flowers to the family in memory of Jeannette Kinkaid, please visit our flower store.