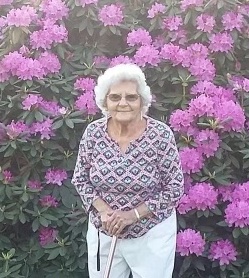 Flossie Irene Roy, 83, of Oakland, passed away on Wednesday, August 24, 2022, at Stonerise of Kingwood Nursing Home. Born on February 21, 1939, in Mt. Lake Park, she was the daughter of the late Homer and Beulah (Paugh) Felton.

She worked at Oakmar Restaurant as a waitress. She was a member of the Corinth Pentecostal Holiness Church. She was also a volunteer for Hospice of Garrett County. In addition to spending time with her family, she enjoyed gardening her flowers, embroidery and crocheting, watching Wheel of Fortune and Jeopardy, playing cards, especially on New Years Eve, and cooking in her strawberry themed kitchen.

In addition to her parents, she was preceded in death by her husband, Ronald Roy, and a son, Tom Roy.

Per her request, Flossie will be cremated. A private memorial service will be announced at a later date.

The C & S Fredlock Funeral Home, P.A., Oakland is honored to be serving the Roy family.

To order memorial trees or send flowers to the family in memory of Flossie Roy, please visit our flower store.