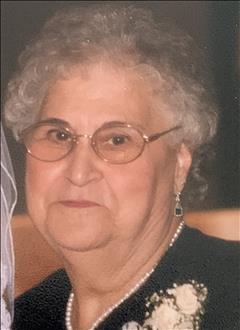 Eleanor Denora James, 91, passed away January 22, 2020 at Cortland Acres in Thomas, West Virginia. She was born May 16, 1928 in Douglas, West Virginia a daughter to the late Angelo and Mary Casino Cearocco.

Eleanor was Catholic by faith. She was a member of FOE 936. She took great pride in being a homemaker and caring for her family. She loved being involved in the local communities and preparing for the community dinners. Her favorite pastimes were playing BINGO, the challenges of word puzzles, and reading books.

Friends will be received at Hinkle-Fenner Funeral Home, Friday, January 24, from 5:00 pm - 8:00 pm with rosary held at 7:30 pm. A Mass of Christian burial will be held, 11:00 am, Saturday, January 25, at St. Thomas Aquinas Catholic Church with Father Timothy Grassi as celebrant. Interment will follow in Texas Cemetery, Horse Shoe Run, West Virginia. Hinkle-Fenner Funeral Home has been entrusted with the arrangements. Condolences may be made to the family at www.hinklefennerfuneralhome.com

To order memorial trees or send flowers to the family in memory of Eleanor James, please visit our flower store.