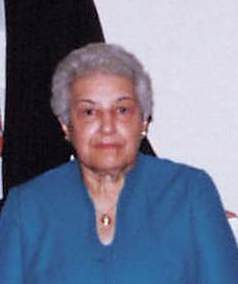 Edith Rose (Ross) DiBacco, 97, of Thomas, WV, was called by her heavenly Father to depart this life on February 12, 2022, at her home surrounded by her family. Born September 30, 1924, the daughter of the late Emedio and Agatha (Soccoccia) Ross.

She was a graduate of Coalton High School. The majority of her life, Edith was a homemaker along with working as a sales clerk for Coffman’s Dept. Store. She was a loving mother, grandmother, and great-grandmother who took great pride in her family. She was a member of St. Thomas Aquinas Catholic Church; participating in many projects with the church. She was especially proud of helping to start the first funeral brunch project sponsored by St. Thomas Altar Society. She was a wonderful cook who welcomed family and friends into to her home graciously. She also enjoyed gardening, ceramics, and various craft projects. She loved watching game shows on TV and shopping days with her daughters.

She is survived by three children, Anita Flanagan and special son-in-law, Jerry, F. Renee DiBacco, and Joseph DiBacco all of Thomas; two Grandchildren, Michael B. Flanagan and wife Melony of Hambleton, and Jody Flanagan of Thomas; two great-grandsons, Caleb and Collin Flanagan of Hambleton; sister-in-law, Betty Ross of Elkins; numerous special nieces, nephews, great nieces and great nephews along with several cousins on both sides of the family.

In addition to her parents, she was preceded in death by her husband in 1963, Guido J. DiBacco. Also preceding her in death were four sisters, Mary DiBacco, Antoinette Colabrese, Ann Pase, and Francis Triplett; five brothers, Julie Ross, Guido Ross, John Ross, Lawrence Ross and Carmen Ross; along with several nieces and nephews. Edith was the last surviving member of her immediate family.

Friends will be received Tuesday, February 15, 2022, at Hinkle-Fenner Funeral Home from 5 to 8 pm with the Rosary held at 7:30 pm. A Mass of Christian Burial will be held, 10 am, Wednesday, February 16, 2022, at St. Thomas Aquinas Catholic Church with Father Martin Smay and Father John Vincent DiBacco as celebrants. Interment will follow in the Mt. Calvary Cemetery. The Hinkle-Fenner Funeral Home is honored to be serving the DiBacco family at this time.

At the request of the family, in lieu of flowers, donations may be made to Thomas Fire Department PO Box 27 Thomas, WV 26292 or St. Thomas Aquinas Catholic Church PO Box 300 Thomas, WV 26292.

To order memorial trees or send flowers to the family in memory of Edith DiBacco, please visit our flower store.