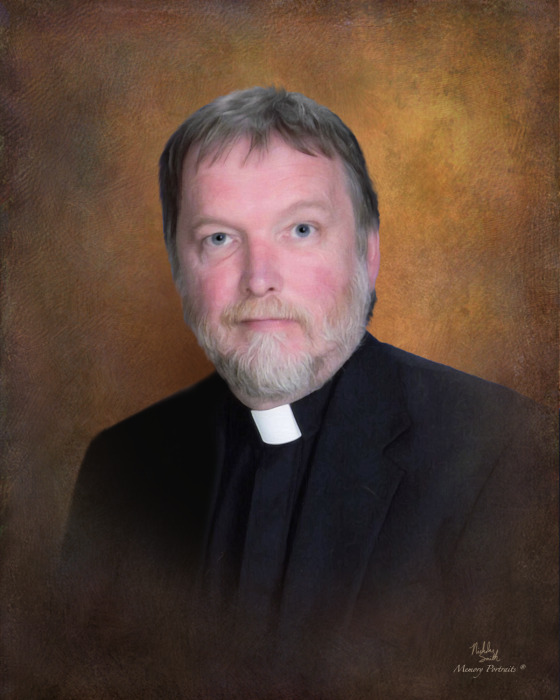 The Rev. Dr. C. Scott Robinson, 69, of Oakland passed away December 8, 2021, surrounded by family at his home, after a valiant battle with cancer. Born on October 7, 1952, he was preceded in death by his parents, John and Betty Robinson, and his oldest brother, John "Jay".

Scott grew up in Cumberland, earned his D.D.S. at the University of Maryland in 1980, and joined his father's private dental practice in LaVale, where he practiced for 21 years. For ten of those years, he was a Clinical Instructor in Dental Auxiliary Programs at Allegany College of Maryland, and for six years he was a Contract Dentist and Consultant for the US Department of Justice, Federal Bureau of Prisons. He was also an active member of the Greater Cumberland Jaycees and the Cumberland Volleyball Club. He served as Chair of the Board of Directors for Lions Manor Nursing Home.

As a young man in Cumberland, Scott was a radio announcer and became an accomplished musician, playing bass guitar and guitar and singing for the rock and roll band "The Living End" and performing solo for church weddings, baptisms, and funerals. He started and led praise bands for St. Paul's Lutheran Church in Cumberland and Trinity Lutheran Church in Somerset, Pennsylvania.

With the support of his wife, Laura (Hintz) Robinson, Scott discerned that he would attend Lutheran Theological Seminary at Gettysburg, where he earned his Master of Divinity with Class Honors. After graduation, Scott served on the Alumni Council, Admissions, and Faculty Search Committees there.

He and Laura and their beloved dog Jessie moved to Garrett County when Scott answered the call from St. Mark's Lutheran Church in Oakland to be their "Pastor Scott" in 2005. He tirelessly served his congregation and community and was supply and interim pastor for several Lutheran churches in this area as well.

Pastor Scott Robinson shared his lifelong love for music by playing his guitar and singing frequently for worship services at St. Mark's. He sang tenor in the choir and also sang for a few years in Garrett Choral Society until his civic work increased. Pastor Scott served as Chairperson of the Board of Governors for Garrett Regional Medical Center and served on the Boards of Garrett Cooperative Ministries, The Dove Center, Garrett County Community Action Committee, and United Way of Garrett County.

Because of his reputation for caring and for being a champion for social justice, Pastor Scott Robinson was appointed to the Western Maryland Advisory Council by the Maryland Commission on Civil Rights in 2019. He encouraged friends to become members of the new county chapter of NAACP, the last to be established in Maryland. He taught Adult Forum (Sunday School) at St. Mark's, on topics ranging from books of the Bible, world religions, women in the Bible, race, and sexuality.

Pastor Scott leaves a legacy of sermons, monologues, liturgy, and lessons at St. Mark's Lutheran Church that express his abiding faith and love for learning, his endearing humor and love for God's creation. Twenty of his sermons comprise the recently published Sermons for Healing, edited by parishioner and writer, Mary Reisinger.

Over the years, Scott enjoyed tennis, golf, volleyball, camping, home improvement, carpentry, vacations, boating, and keeping up with the news of the day.

He will be greatly missed by his congregation, family, and community of friends. In addition to them, the family would like to thank the amazing teams at WVU Cancer Institute at GRMC and Hospice of Garrett County for their compassionate, attentive care.

Friends will be received at the C & S Fredlock Funeral Home, P.A., 21 N 2nd St., Oakland, MD, on Monday, December 13th from 5 to 7 PM. A memorial service will be held in St. Mark's Lutheran Church, 6 S 2nd St., Oakland on Tuesday, December 14th at 11 AM. The memorial service will be recorded. If you are unable to attend and would like to view the recording, please contact the church office at 301-334-2668 to receive access. Due to processing time, the recording will be available one week after the service.

In lieu of flowers, Scott's memory would be honored if you choose to volunteer time, service, and/or resources to St. Mark's or one of the local organizations named here that he served.

The C & S Fredlock Funeral Home is honored to be caring for Pastor Scott's family.

To order memorial trees or send flowers to the family in memory of Charles Robinson, please visit our flower store.