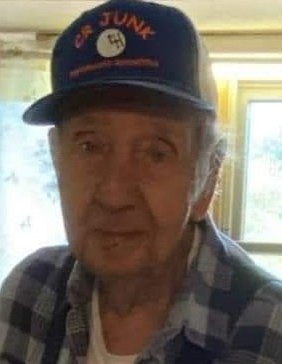 Blaine Douglas Kight, 87, of Oakland passed away on March 2, 2022, at Ruby Memorial Hospital with his wife of 67 years by his side.
Born on August 17, 1934, in Eglon, WV, he was the son of the late George and Edith (Stottlemyer) Kight.
Blaine worked for the C & P Telephone Company and then became the owner of his own excavating business. As a backhoe operator, he dug graves at the Garrett County Memorial Gardens in Oakland.
In his early years, Blaine enjoyed dirt track racing, flying air planes and hunting. Later, one of his favorite pastimes would be to take a car ride and see where he would end up or to just see the scenery. He also spent many hours for many years at the Loch Lynn Restaurant drinking coffee and shooting the breeze with his buddies.
Blaine is survived by his wife, Katherine (Hebb) Kight; one son, Doug Kight and wife Dawn; four daughters, Barbara Myers, Sharon Kight, Leslie Harvey and husband Jim, and Valerie Pierce and husband Colin; grandchildren, Jason Myers (and Amber), Craig Myers (and Jennifer), Jessica Rhodes (and Brock), Logan Myers (and Angelina), Dustin Williams (and Chelsie), Emily Williams, and Amy Shreve (and Ryan); great grandchildren, Madison, Allison, Coltin, Damon, Chase, Gavin, Blair, Barrett, Tucker, Travis and Emma; many friends and neighbors including a special friend, Charles "Monk" Rishell, and special neighbors, Jim and Sheryl Thomas. There was a special place in his heart for his loving dog, Molly.
In addition to his parents, he was preceded in death by a brother, Sheridan Kight, and a son in law, Tim Myers.
Friends will be received at the C & S Fredlock Funeral Home, P.A., 21 N 2nd St., Oakland on Sunday, March 6, 2022, from 1 to 4 PM. A funeral service will be held at 4 PM with Pastor Russell Liller officiating. After the service, Blaine will be cremated and a private graveside service will be held at a later date.
The C & S Fredlock Funeral Home is honored to be serving the Kight family.

To order memorial trees or send flowers to the family in memory of Blaine Kight, please visit our flower store.