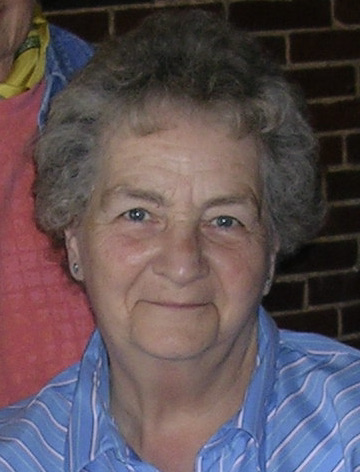 Bettye Jean McConnell, known throughout the Cranesville community as a prolific baker and retired school cook, passed away peacefully Tuesday, November 17, 2020 after a long illness. She was 86 years old.

The second of two daughters, Bettye was born in Fort Gay, W.Va., to Goodwin W. Lycan and Muriel Ratcliff Lycan in 1934. As a young girl, she loved working in the gardens and dancing.

She married her teenage sweetheart, the late John “Jim” McConnell, in 1951. The couple settled in Radnor, W.Va., but moved to Cranesville in 1958 to pursue their shared love of farming.

While the couple managed their farm and raised four children, Bettye worked as a school cook at Terra Alta and East Preston High Schools for nearly three decades, retiring in 1998. Later in life, former students would tell Bettye’s family that she fed impoverished children in the community who didn’t have lunch money. She was also an avid supporter of school groups and helped with fundraisers to buy band or athletic equipment and uniforms. Bettye also enjoyed volunteering with the American Cancer Society and as an elections poll worker.

While working at the secondary schools, she perfected her baking skills and would go on to dazzle friends and family with industrial-sized sheets of perfectly portioned bread rolls and pepperoni rolls. (Truth be told, her pepperoni “rolls” were effectively loaves due to their ample size.) Though she dabbled with various recipes in the early years, she insisted rolls and other baked goods were best made with lard. As mothers often are, she was right.

Bettye was also known for her fruitcakes that, despite their controversial reputation in pop culture, were as delicious as they were substantial. Her repertoire also included German chocolate cake, pies of each and every variety, “filled cookies,” potato candy and chocolate covered eggs.

In short, Bettye could do it all -- except for writing down precise recipes. It took years before her grown children were able to come close to replicating her bread dough, a recipe that includes 15 lbs. of flour and had to be made in a commercial mixer. Food always tasted better when it came from Bettye’s kitchen, which she kept stocked with freshly brewed coffee and something sweet to eat.

Like many in her generation, Bettye was a homesteader who embroidered her own pillows, crocheted her grandchildren’s Easter baskets and found a way to preserve and can fruits and vegetables. She also refused to throw away anything she deemed of value.

But unlike many in her generation, her love for family made it easy for her to let go of antiquated views and embrace changing norms. As a result, family gatherings and reunions at the McConnell household were events in which all were welcome and all were well fed.

Bettye also leaves behind many loving nieces and nephews across the region, including Donna Payne, Buddy Lee Perry, Kim Hardwick and their respective families.

The McConnell Family thanks Cheryl Cramer and Justin Staudinger, as well as nurses from Amedisys, for the love and care they extended to Bettye and Jim in their final years.

Condolences may be made online at the C & S Fredlock Funeral Home. In lieu of flowers, the family requests donations be made to Food for Preston at: P.O. Box 1175, Kingwood, W.Va. 26537.

A celebration of her life will be announced at a later date.

The C & S Fredlock Funeral Home, P.A., Oakland is honored to be serving the McConnell family at this time.

To order memorial trees or send flowers to the family in memory of Bettye McConnell, please visit our flower store.