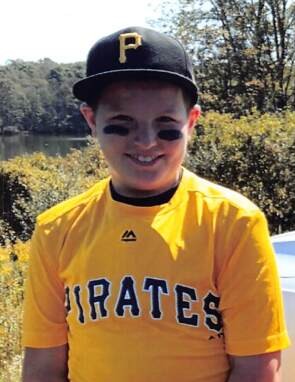 Aaron attended Crellin Elementary and Southern Middle Schools.  His passion was baseball and he loved playing all sports.  He was a member of the Oakland Youth Baseball Team and Tri-County Basketball Team.  Aaron made the effort to attend practices and games even when he was ill or recovering from treatment. He was an inspiration to many others who were also battling cancer because he continued to live his life and seek treatment with a smile on his face.  Aaron enjoyed spending time and joking around with his family.  He had a wonderful sense of humor and his laughter was contagious.

Friends will be received at the C & S Fredlock Funeral Home, P.A., 21 N 2nd St., Oakland on Wednesday, January 13, 2021 from 10-1 PM at which time a funeral service will be held.  Private interment will be held in Garrett County Memorial Gardens. Face masks and social distancing are required and we ask that if you or a family member are feeling ill, you stay home and visit with the family at a later time.

Aaron’s family would like to thank Stacy, Shari, Susan, Hospice of Garrett County, Cindy’s Fund, and the entire community for the help and overwhelming support shown during Aaron’s illness.

Memorial contributions may be directed to Hospice of Garrett County or to Cindy’s Fund.

The C & S Fredlock Funeral Home, P.A., Oakland is honored to be serving the Ashby family at this time.

To order memorial trees or send flowers to the family in memory of Aaron Ashby, please visit our flower store.